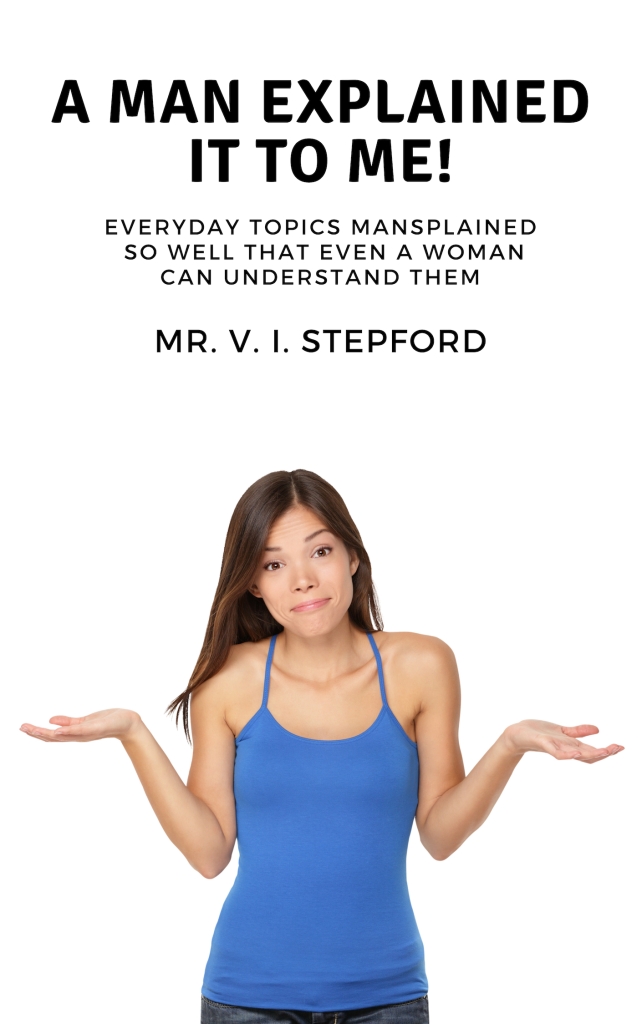 My new book, A Man Explained It To Me!: Everyday Topics Mansplained So Well That Even A Woman Can Understand Them by Mr. V. I. Stepford is now available on Amazon.  Below are links to various countries where you can purchase it:

Amazon is currently reviewing my new book,  A Man Explained It To Me!: Everyday Topics Mansplained So Well That Even A Woman Can Understand Them by Mr. V. I. Stepford, for publication.

I expect the book will be released by January 23, 2019, but I will certainly keep you all informed when the book goes live on Amazon.

It is only in Kindle format right now, but I should have the paperback version available within a week.

This will be the first in the Mansplaining Series by Mr. V. I. Stepford.

The Nazi Party (formally known as the National Socialist German Workers’ Party) was very much socialist and left wing.  Nazis were the furthest thing from being right wing ideology of any kind.

The vast majority of feminists are socialists and believe in left-wing ideologies such as State control of almost everything and a loss of personal liberties to benefit the larger group.

Conservatives are opposed to almost all socialist principles and believe in right-wing ideologies such as limited government and the protection of personal liberties.

The Nazi Party believed in the imperative of lying and using deceit to achieve its aims.  “ If you repeat a lie often enough, people will believe it, and you will even come to believe it yourself.“ – Joseph Goebbels, Nazi Propaganda Minister.

Feminists lie about everything from rape culture to the mythical wage gap, and honestly believe the lies themselves despite the mountains of evidence disproving their claims.

Conservatives believe that data and facts should rule the day.  Data and statistics do not support either the concept of rape culture in the West, or a gender wage gap.

The Nazi Party believed very strongly in indoctrinating youth into their ideology.

Feminism believes that Feminist Theory should be taught starting in Kindergarten.

Conservatives believe that children should be allowed to be children, without indoctrination of any kind.  Personal liberty and freedom of choice are vital to the development of a healthy mind.  Any kind of indoctrination is morally reprehensible.

So remember when a feminist calls you a Nazi, they’re using a defense mechanism known as projection – accusing others of a crime of which they themselves are guilty.

Me: You have such a pretty face, kitten.


Me: It would be so much prettier with my cock in your mouth.

See “Chloe” here?  She has the right idea.  She wears a nametag as a necklace (a number would be fine, too).

In the post-feminism world (under Emperor Trump), this will be made mandatory.  Single girls will be forced to wear nametag-necklaces and owned girls will wear one that simply says, “Owned.”

Now that’s a New World Order I can get behind.

When you give her a long list of small tasks to do throughout her day, it keeps her mind busy.  And when her mind is busy, she doesn’t have time to overanalyze every little thing in her life.

Make sure the tasks are small enough not to overwhelm her, and clear enough that she doesn’t wonder if she’s doing them right.

A busy girl is a good girl.

If the two of you have talked about her becoming your slavegirl, why not go all the way?

Remember that slaves have never had any rights.  The two of you need to discuss whether rights are something she wants to surrender.

Also remember: it’s critical that the two of you have a deeply established and cultivated trust before any such discussion can begin.

But maybe she doesn’t want rights.  Maybe freedoms mean nothing to her.

Maybe all she wants to be is your little slavegirl.

Try it for a weekend.  Then try it for a week.  Then a month.  And if all goes well, try signing a 7 year contract – at the end of which, she’s offered freedom once again.

Consensual slavery is a big decision.  Don’t rush into it.  Make sure you both have plenty of trial runs and plenty of information.

And if it works for you and you’re both happy, don’t ever apologize.

You know the girls who have cute faces and innocent voices?  The ones who are overly polite, completely adorable, and like to serve you food and drink just to see you smile?

VIS in other languages!

While Vintage In Stepford generally preaches the virtues of Traditional Gender Role relationships, you will also find a lot of material on the Men First Movement (male superiority, female inferiority) and social commentary on the feminist and anti-feminist movements. Please read The 6 Major Misconceptions About This Blog. All original material Copyright © 2016-2021 Vintage In Stepford, All Rights Reserved.

Vintage In Stepford on the World Wide Web